The general contractor of the GAC treatment system within the water treatment plant worked with the owner to determine the existing condition of the clear well. American Water identified that they were losing a significant amount of water from the clear well tank while it was out of service, indicating leaks. The 90-year-old tank had begun to leak from the inside out.

Understanding the clear well’s existing condition, the general contractor proposed 100% solids, high build epoxy coatings as a rehabilitative solution and introduced the owner to Warren Environmental’s coating system. Warren’s epoxy was the best value solution with the ability to seal the clear well’s existing leaks, protect it from corrosion and abrasion, and extend its service life. The general contractor’s strong relationship with the owner meant they were trusted to bring on a reliable coatings contractor to perform the rehabilitation work. With over 25 years of experience with successful epoxy applications, A&W Coatings, master applicator of Warren’s epoxy system, was subcontracted to apply epoxy coatings to the floor, interior walls, and pilaster columns in the clear well totaling approximately 11,700 square feet.

The Fort Leavenworth base is a bisphenol A (BPA) free facility—an industrial chemical often found in polycarbonate plastics and epoxy resins that can cause potential adverse health effects. For this reason, it was important to the owner that Warren’s epoxy was certified for potable water use, as well as BPA free. American Water selected Warren’s 501-02 BPA free epoxy product for the project, certified for potable use and formulated with a BPA free resin. In addition, the epoxy applied had zero volatile organic compounds (VOCs), making it safe for the environment and the applicators who would install it.

The scope of work included the surface preparation and coating installation of the 77-foot by 66-foot by 14-foot clear well tank using Warren’s 501-02 BPA free epoxy, NSF and Water Quality Association certified to ANSI Standard 61. The scope also included lining eight small pilasters measuring 1.3-foot by 1.5-foot by 12.5-foot and 14 large pilasters, 1.5-foot by 1.5-foot by 12.5-foot in size. The coating was installed up to the overflow point of the tank at 12.5-feet where the water level typically sits.

Before applying the epoxy coating, A&W pressure washed the concrete at 5,000 pounds per square inch (psi) to remove the film buildup from the substrate, but the crew determined that the concrete substrate was too smooth for the product’s optimal adhesion to the surface. To ensure a high-quality application, A&W decided internally to abrasive blast the structure at their own cost, without the influence of an inspector or other representatives on-site—a reflection of A&W’s commitment to doing things right. The crew abrasive blasted the concrete to achieve an International Concrete Repair Institute (ICRI) concrete surface profile (CSP) of 4-5 for the epoxy application.

A&W applied 100 mils of Warren Environmental’s 501-02 epoxy on the interior walls, floor, and pilasters of the clear well. The product was sprayed by a six-person crew using a specialized trailer rig outfitted with a Graco XP50 plural component pump system and Warren’s patented equipment. During the coating installation, two technicians spray applied epoxy simultaneously. The project’s duration was three weeks, taking place from November 29 to December 21, 2021. Following the coating installation, the clear well was filled with water and tested during the first week of January 2022. No leaks were detected during the testing phase. The clear well is currently in service at Fort Leavenworth.

There were several safety considerations on this job. The project included all confined space work with an 18-foot drop into the work area. To safely enter and exit the tank, A&W used personal fall protection harnesses. To monitor air quality and potentially hazardous gases within the confined space, a gas monitor was used to monitor oxygen, carbon dioxide (CO2), hydrogen sulfide (H2S), and flammables. Ventilation fans used to circulate air were sized to provide a minimum of six air changes per hour, preventing the clear well tank from becoming oxygen deficient. Respirators and Tyvek suits were worn by all technicians performing work on the site and radios were used for communication.

In addition, Warren’s 501-02 epoxy was free of volatile organic compounds (VOCs), solvents, styrene, and isocyanates, making it safe for crew members to apply the non-hazardous product within the confined space. The epoxy’s lack of solvents also reduced the risk of fire or explosion.

The project’s location brought logistical challenges. As an active military base, the entire Fort Leavenworth site had restricted access. The A&W crew had to check in each day to access the project site and were each required to complete a background check every seven days.

During application, the weather was a contributing factor to the difference in temperature between the interior and exterior of the clear well, affecting the project with high levels of condensation within the tank. While Warren’s epoxy can be applied to damp surfaces, otherwise known as saturated surface dry (SSD) surfaces, the condensation needed to be addressed for optimal adhesion to the concrete substrate. To control the condensation, A&W used 400,000 British thermal unit (BTU) indirect heaters to normalize the difference in temperature. The team developed this solution in a timely manner of their own volition to ensure a high-quality, functional application for the owner.

The A&W team also overcame raw material shortages impacting the entire coatings industry through direct coordination with Warren Environmental. As a result, A&W was only delayed a month in receiving materials from the ideal timeline for the coating. This was remarkable because, at the time, Warren was able to obtain 100% of the raw material allocation coming into the country from Europe for the 501-02 formulation. Warren was able to help A&W secure the materials within a restricted timeline to complete the project within the owner’s designated schedule. 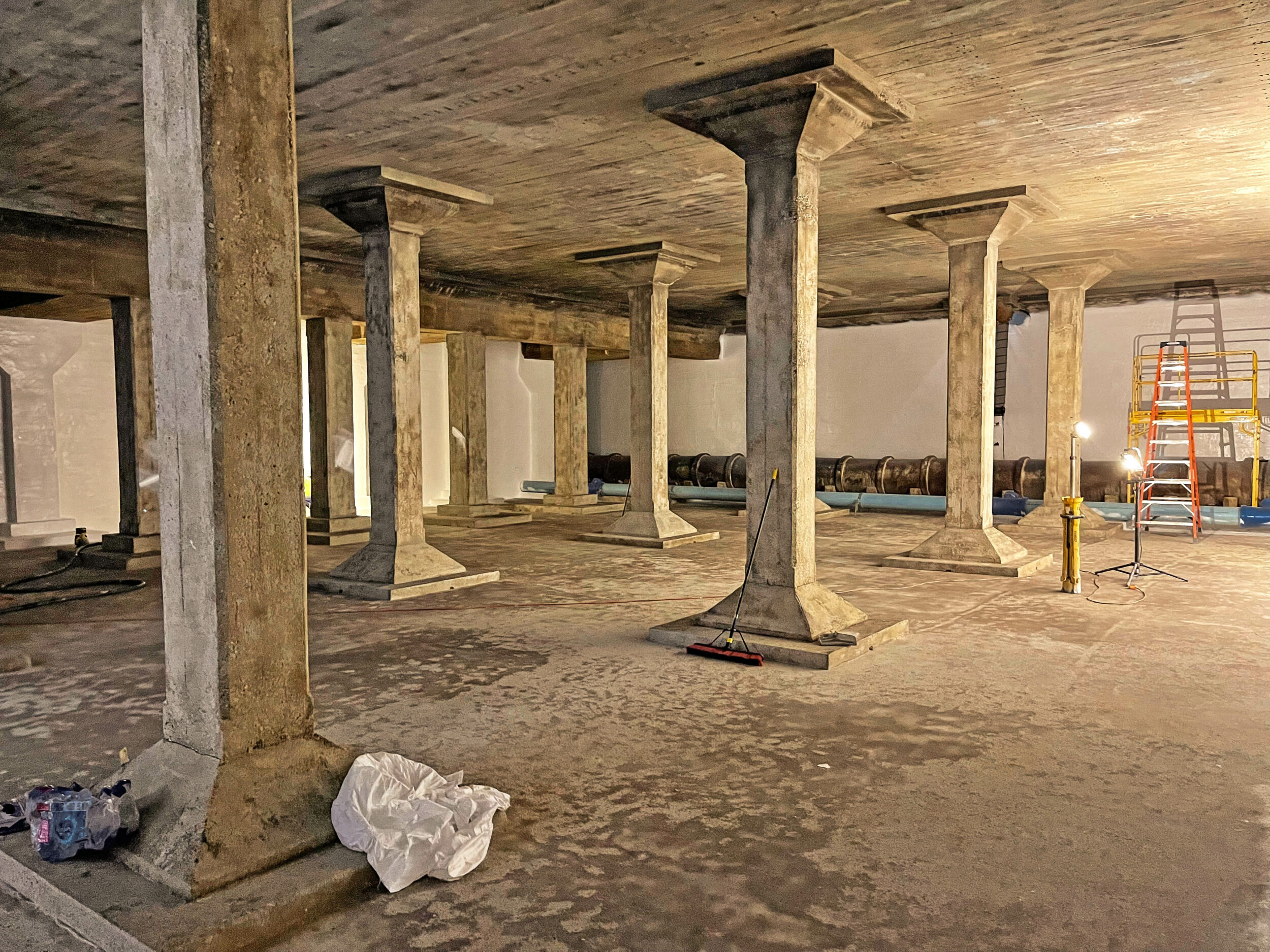 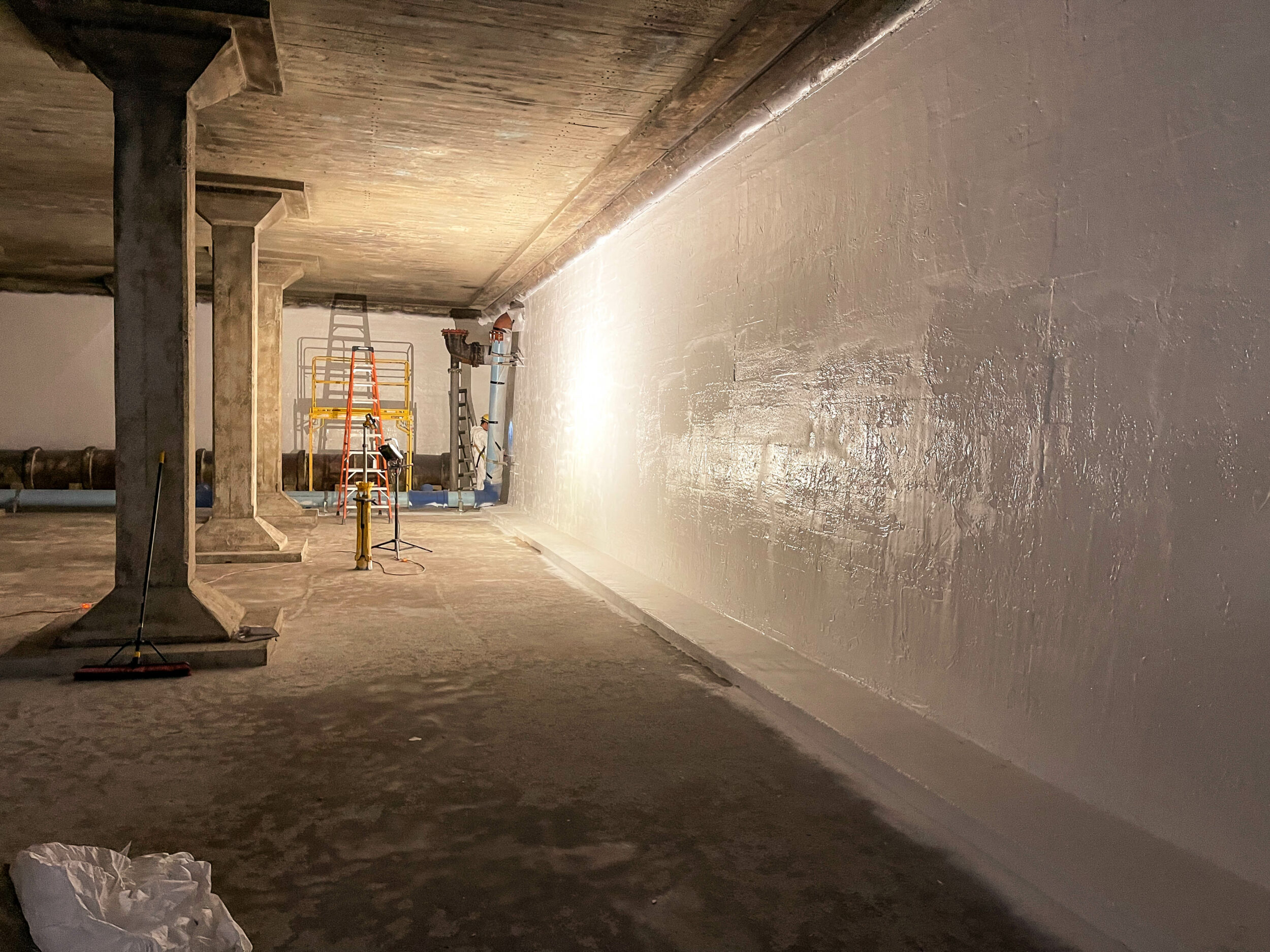 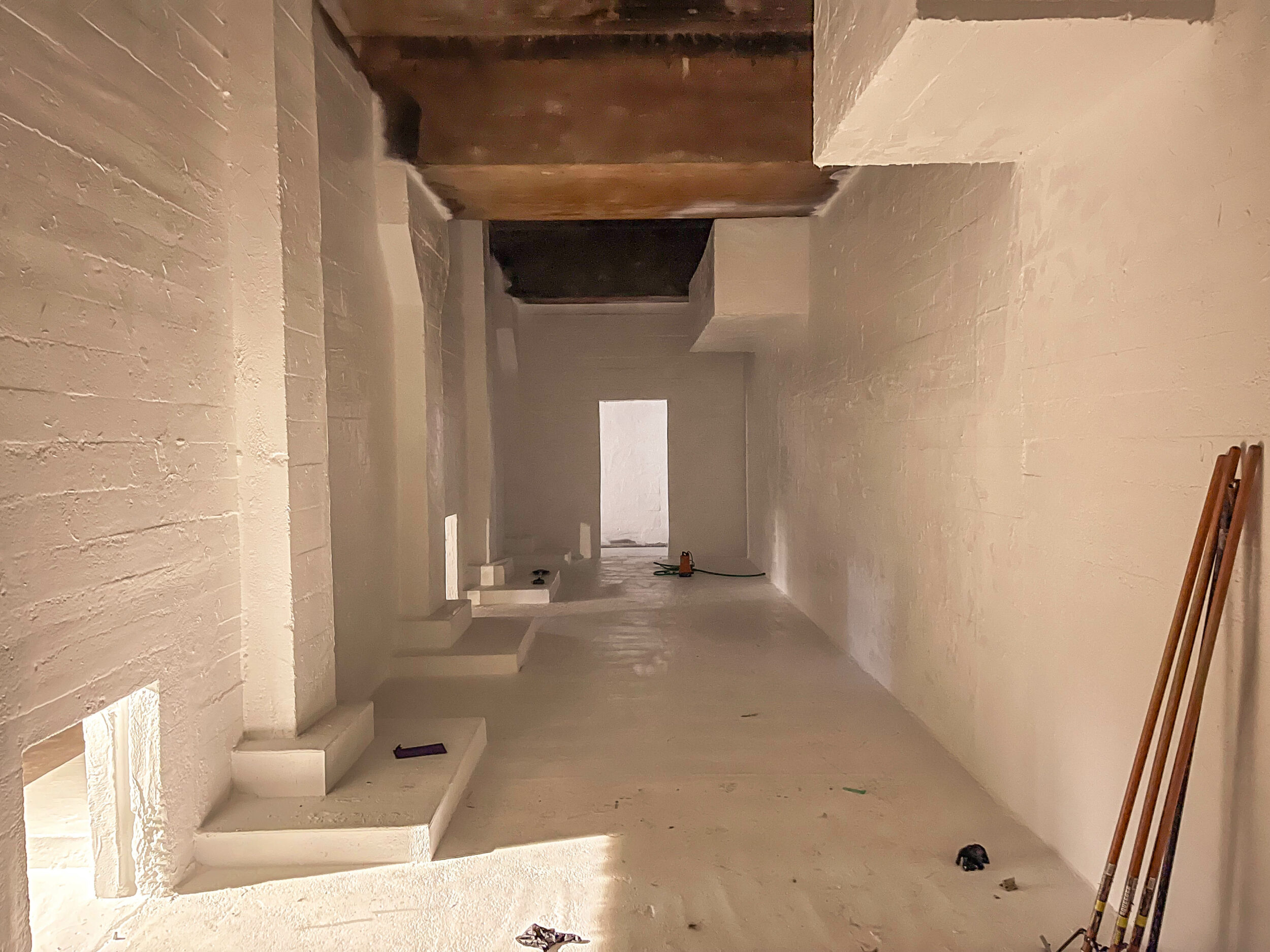 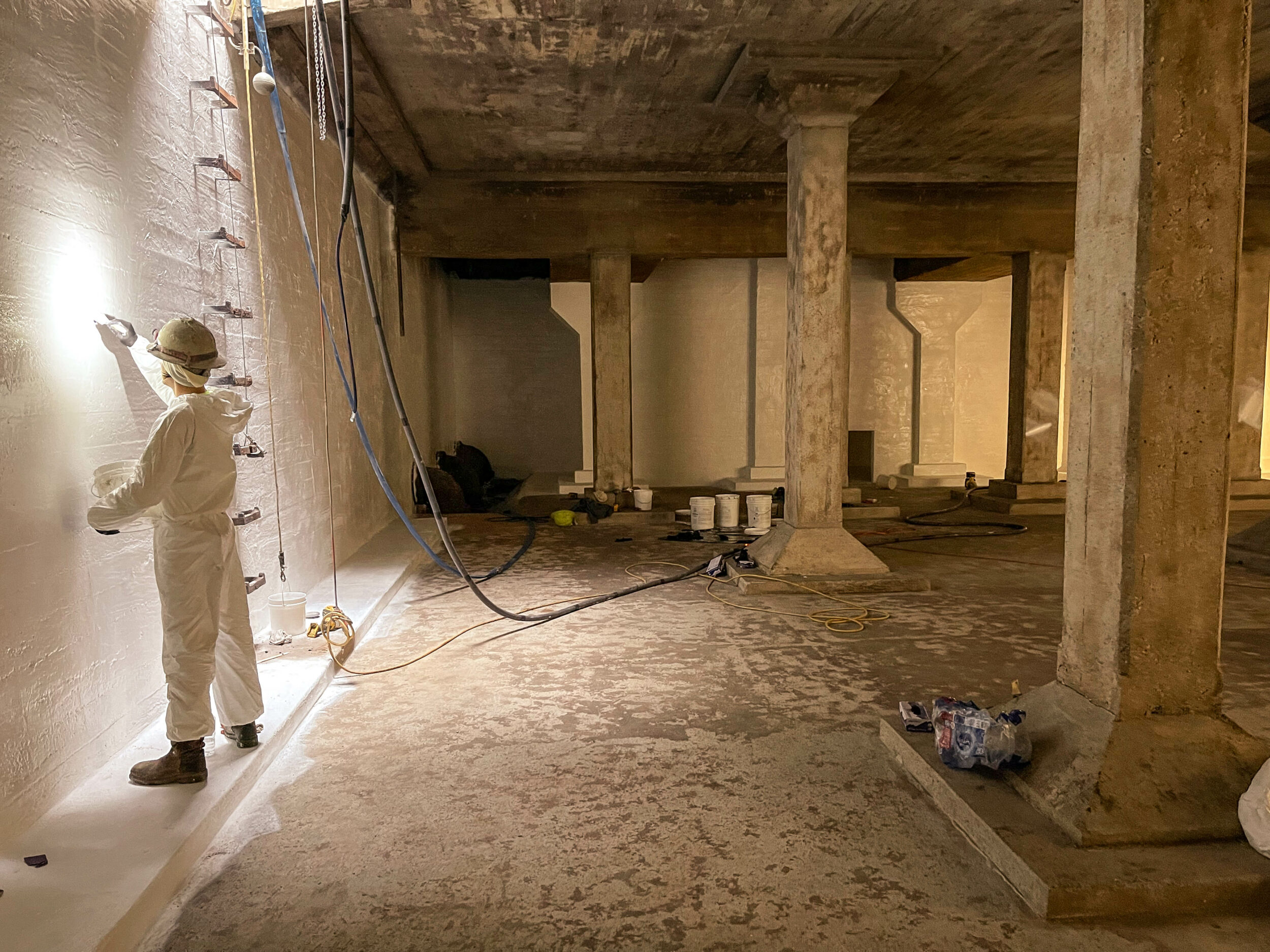 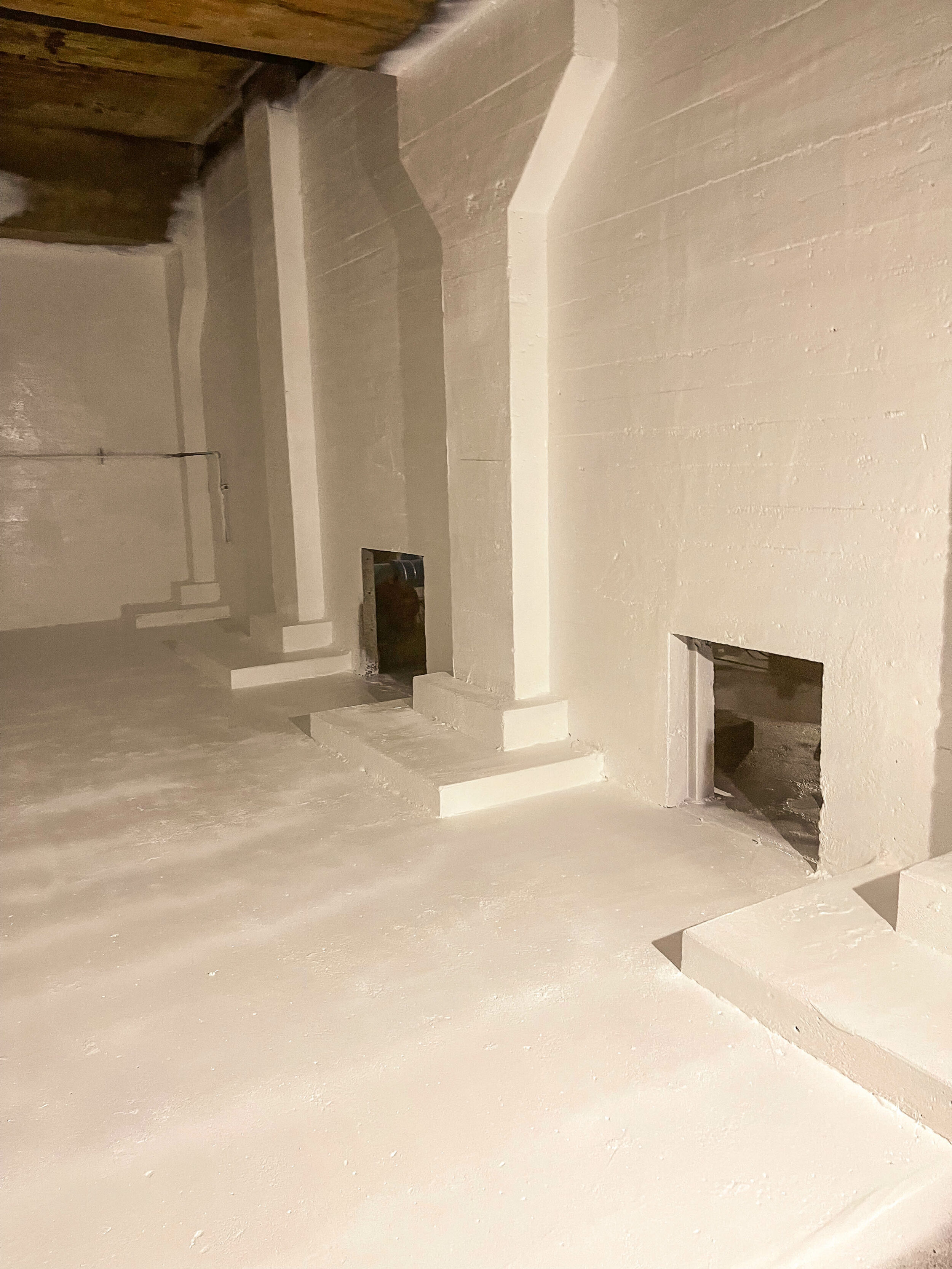