Brownsville Public Utilities Board’s (BPUB) South Wastewater Treatment Plant Improvements Package 5 project began in January 2021 to rehabilitate existing equipment and expand the plant’s capacity to 12.8 million gallons per day (MGD). The general contractor’s scope of work included upgrading and retrofitting the headworks grit processing system and influent channel rehabilitation. The grit basins were responsible for filtering solids from the wastewater that entered the facility through the plant headworks and bar screens into an influent distribution channel. The channel and grit equipment were heavily corroded after years of exposure to H2S gas and abrasive materials such as sand and dirt. The grit basins had been previously lined with a protective coating material, but the existing coating had begun to delaminate over time. To prevent a coating failure from reoccurring, BPUB wanted a proven coating solution with long-term adhesion characteristics and a strong history of documented corrosion and abrasion resistance.

Although the owner had requested a coating system that was previously specified for use on the project, the general contractor working on the facility’s improvements project proposed the use of Warren Environmental’s high performance epoxy system. The owner reviewed Warren’s proposed system against the previously specified coating and ultimately selected Warren’s 301-14 epoxy as the best value solution based on a faster application schedule and performance data. Warren’s system was applied by Warren’s master applicator, A&W Coatings (A&W).

The scope of work was to rehabilitate four 21-foot by 21-foot grit channel basins, a six-inch pipe spool, and a six-and-a-half-foot by five-foot influent channel at the South Wastewater Treatment Plant with Warren’s 100% solids, non-hazardous epoxy. The first step of surface preparation required removing the existing polyurethane from the basins using hammer chisels followed by abrasive blasting to remove the remainder and achieve the surface profile required. Once removed, each basin was rinsed with a final wash to eliminate any remaining dust, dirt, and debris. The A&W crew coated the upper five feet, six inches of the grit basin walls from the splash zone to the top of the vapor space, as well as 31 feet of a six and a half foot by five-foot influent channel with 200 mils of Warren’s 301-14 epoxy. Lining the splash zone was important because this area is the most common failure point for coatings due to the constant cycling of immersion to non-immersion and exposure to corrosive H2S gasses being trapped by the plant’s odor control system. In addition, A&W lined an existing six-inch pipe spool with a brush to eliminate a potential future leak in the bottom of an existing cast-in-place wall spool. The lining of the existing wall spool added additional service life for the encased piping.

Based on the plant’s operational guidelines, A&W could only coat two basins at a time from start to finish while the other two remained in service. The crew started by lining the first two grit basins, followed by the pipe spool and influent channel during the change of service. Once the first two grit basins were returned to service, A&W completed the project by lining the last two grit basins as they came offline. This process was completed within the required three-week time frame to maintain the general contractor’s schedule with the help of Warren’s single coat application and quick cure time. Satisfied with the application of Warren’s product, the owner initiated a change order to add scope to include the lining of a three-foot by three-foot by twelve-foot bypass channel in the facility’s headworks.

The crew experienced sweltering heat while on-site with heat indexes consistent at or over 100 degrees, coupled with heavy rainfall. To work through the weather challenges and maintain the schedule, A&W coated each of the grit basins at night. Unlike other coating technologies such as polyureas, polyurethanes, and solvent-thinned epoxies, the 301-14 epoxy’s high moisture tolerance allowed applicators to spray the concrete surfaces with little concern for the water-saturated concrete or high-humidity environment. Warren epoxy’s single coat, quick cure epoxy system maintained the project’s budget and schedule when compared to the originally specified urethane coating, leading to a huge success for everyone involved.

As their first experience with Warren’s epoxy, the BPUB was very pleased with the outcome of this project. Not only did A&W’s expert application solve the owner’s problems of an existing failed coating, but Warren’s epoxy also structurally enhanced the assets and extended their useful service life by protecting them from corrosion and abrasion with superior adhesion. Despite the temperature extremes and humid environment, the epoxy’s high moisture tolerance allowed for ease of application and successful, on-time project delivery. The Warren and A&W team looks forward to returning to the site to conduct a five-year reinspection to observe the epoxy application’s performance over time. 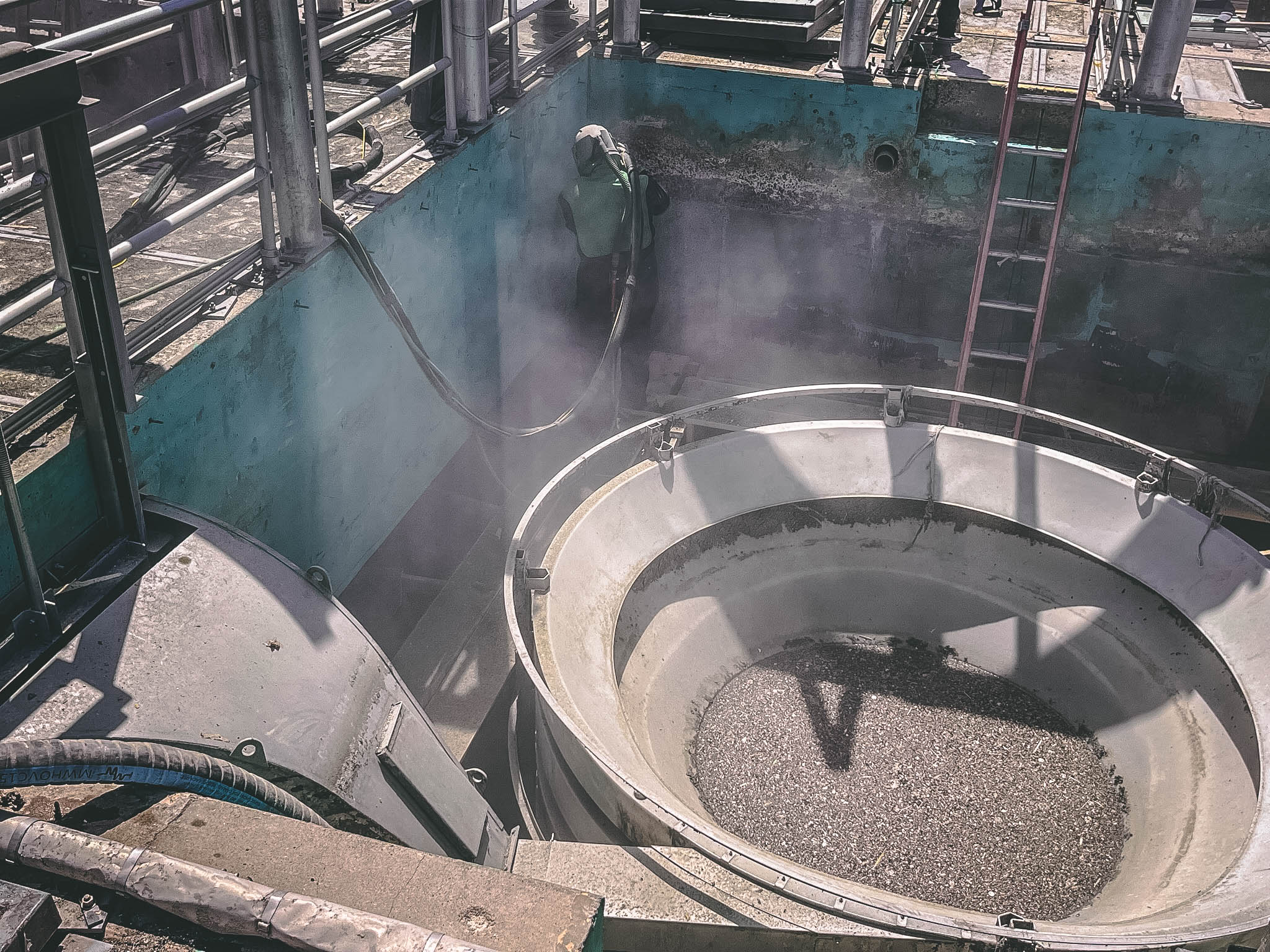 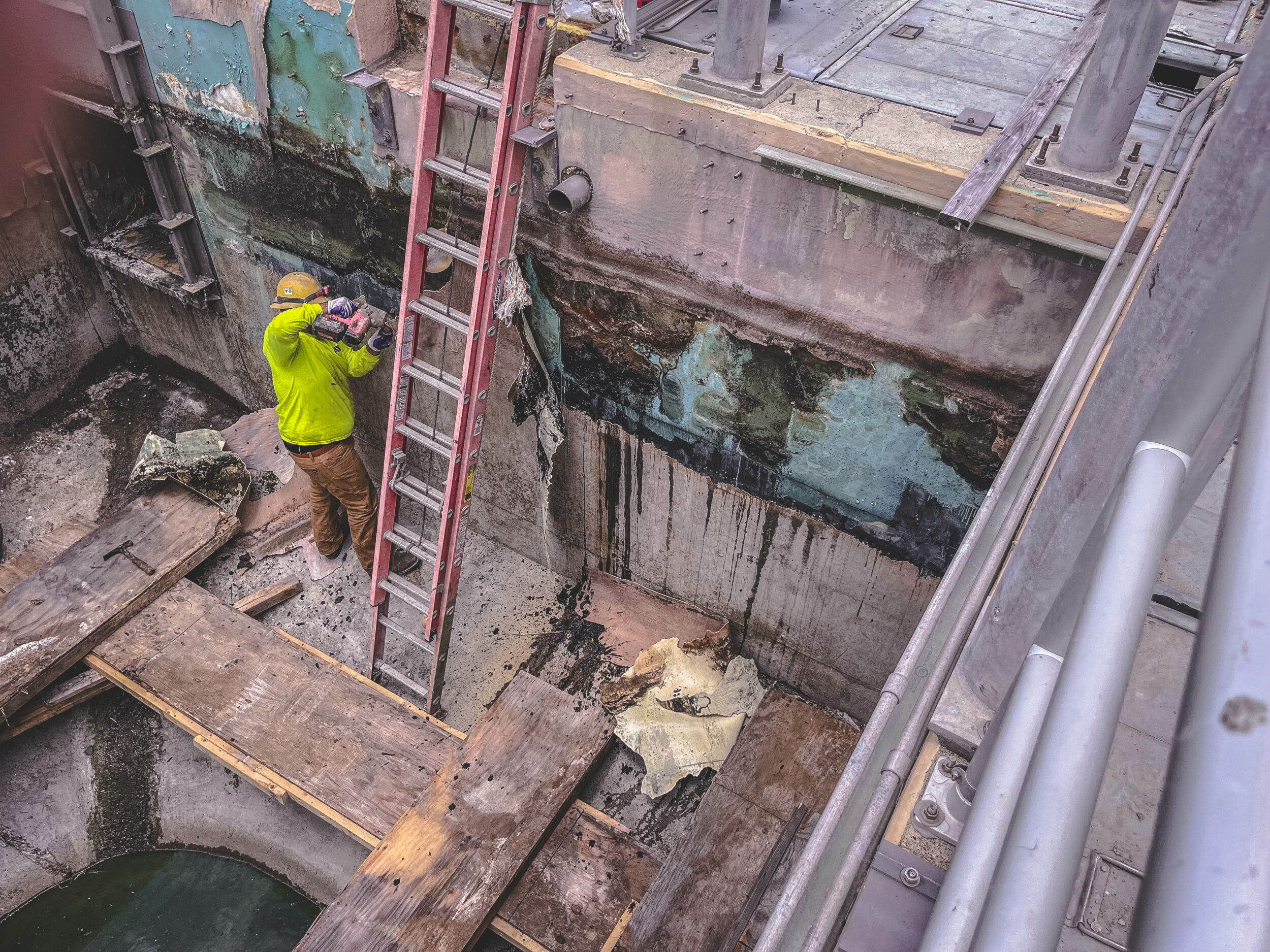 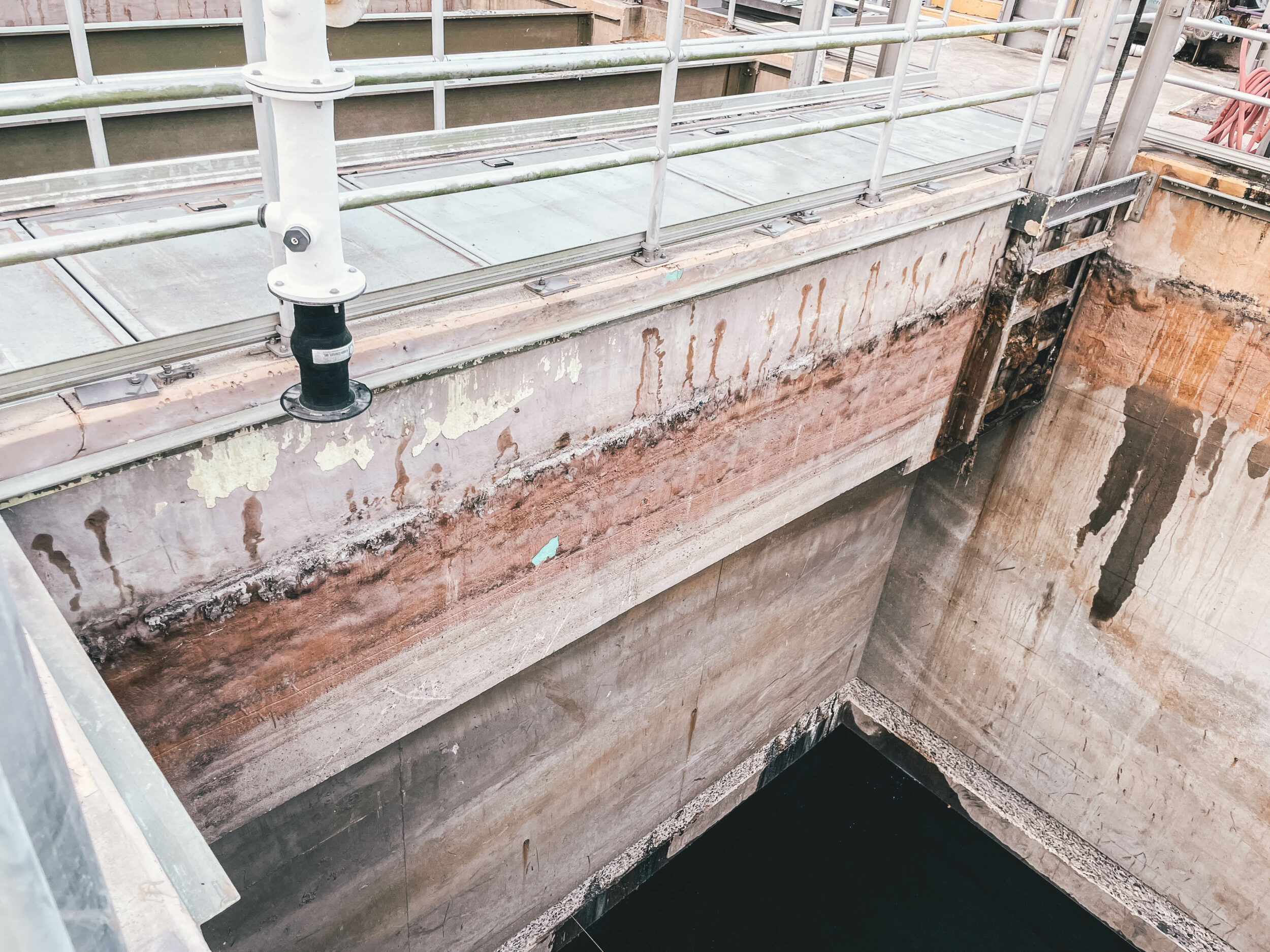 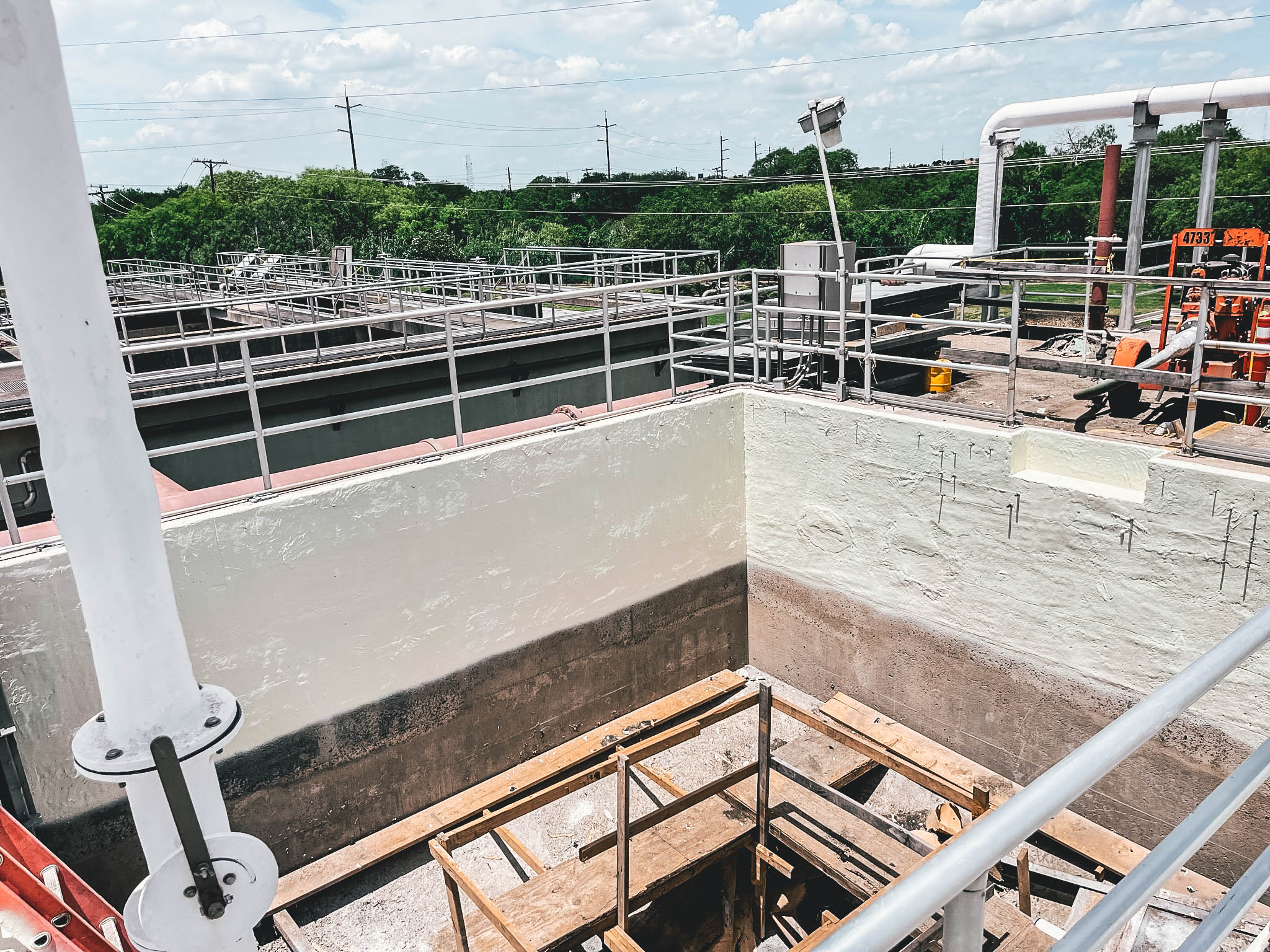 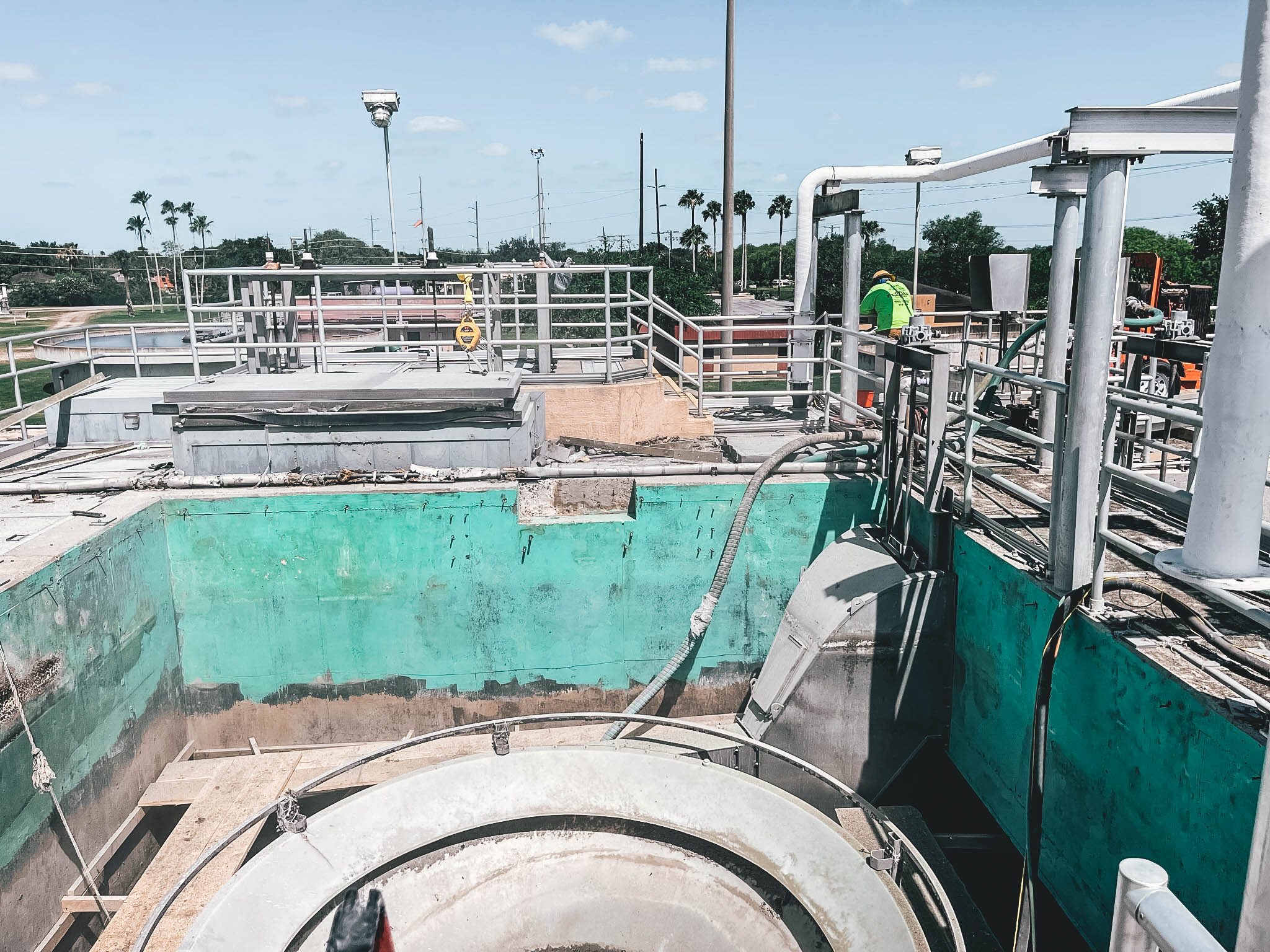